According to reports, on September 10, 1897, a drunken motor cab driver in London, England was arrested for drunk driving (DUI) after crashing his vehicle. The driver entered a guilty plea and was fined.

The American Bar Association tweeted out the following image from a newspaper article that provided details of the arrest and subsequent case: 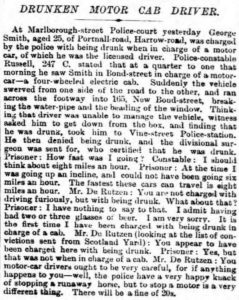 It is interesting to note the following from this article:

First, apparently “driving furiously” was an actual infraction or crime that could have been charged, but was not. Instead, the report indicates that the charge was for “being drunk.”

Second, the “divisional surgeon” was called upon and was able to certify that the Defendant was drunk. Whether or not a driver is impaired is typically one of the main issues in dispute when challenging an allegation of driving under the influence or driving while intoxicated or operating a vehicle while intoxicated (DUI/DWI/OVI). There are a series of tests that are employed in the modern era, including the breath test, blood test, and a variety of field-sobriety tests. These tests, and their results, are subject to criticism by DUI Defense Attorneys with respect to their methodology, employment, and reliability.

Next, it is interesting that a dispute is recorded as to the speed at which the vehicle was traveling. The driver  claimed a speed of perhaps six (6) m.p.h. The constable alleged eight (8) m.p.h. It is interesting how these disputes seem to echo throughout the centuries. As long as there are vehicles and authorities, disputes regarding speed, speeding tickets and speeding allegations are here to stay.

Finally, according to the article, the driver admitted to consuming “two or three glasses of beer.” This is the same type of admission that is repeated so often by those charged with DUI and DWI offenses that it is often a standard expectation that the police report will contain an admission to consuming “a couple beers.”

Although much has changed, so much has remained the same. If you or someone you know has a question regarding a traffic ticket in Tampa, Florida or needs to speak with a Hillsborough County DUI Lawyer, please contact Tampa Criminal Defense Attorney Ron Frey of The Frey Law Firm today.